This week, we served people in a remote village 35 km away from the district headquarters, where most of the people are laborers. The church in this village was founded in 2007, after a pastor gave the village leader a gospel tract. This village leader read the tract and eventually believed in Jesus, along with his family. Initially, the villagers opposed him, but he stood strong in his faith and testified boldly to those around him, even to political leaders and officers. After observing his changed life, other people in the village placed their faith in Jesus and their lives were transformed as well. Now, eight years later, thirty families are gathering regularly to worship Jesus! After reading ServeNow’s The Basic Things You Need to Know about Jesus, the village leader was challenged and encouraged to continue living a faithful and radical life for Jesus. He received the next book in the Basic book series gratefully.

Samson, the village tailor, runs a mobile tailoring shop by carrying his sewing machine around to weekly markets in the surrounding area. In 2005, a man from the Salvation Army met him during one of the weekly markets and told him about Jesus. Samson was very interested and asked the man to visit him again. Every time they met, Samson came one step closer to knowing Jesus, until he gave his heart fully to the Lord. With his newfound faith, Samson started going to the Baptist Church in the village where he met other believers; this helped him to grow in the Lord. Through his life and testimony, his family now also believes in Jesus. When Samson read ServeNow’s The Basic Things You Need to Know about the Bible, his eyes were opened to the importance and power of God’s word. He began to read his Bible regularly and tried to follow and apply God’s Word. The Bible became a living book to him. During this particular visit, he gladly received The Basic Things You Need to Know about Salvation, and promised to read and study it.

In Pastor Kharkov’s own words: “Dear friends, Thank you very much for your support of our church’s ministry! We especially thank you for the Basic book series. It is important for our church, because many members of the church are new believers who need spiritual food. The material in the books is presented in a very simple, basic, and accessible form, which is important because most of the people in our churches are poorly educated. When we received these books, I had the perfect material for our bible study meetings with new believers. The class was held for eight weeks, and each week I gave them homework to do. After every chapter, I made a list of questions that they had to answer by reading the Basic book. Thank you very much. This material has helped me as a pastor in training members of my church.”

Here are some reviews from believers who attended Pastor Kharkov’s class using the Basic book series:

Lubov, a Roma woman: “I thought I already knew enough about the Bible, but after reading the book and taking the Bible class, I realized that I did not know the Bible. There is so much more.”

Alexander, 32 years old: “My idea of what prayer is like has completely changed after reading this book. I began to realize how important prayer is to the Christian life.”

Angela, a 44-year-old Roma who was baptized this summer: “After the lesson devoted to the Bible, my attitude toward the Bible has changed. Now I understand that the Bible is necessary not only to read but to study as well. Thanks for the lessons and books.” 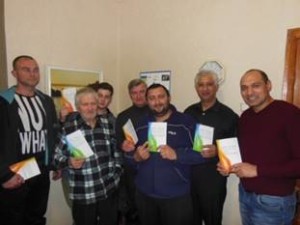 We rejoice in the fact that lives are being changed and people are coming to Christ through the Basic Things You Need to Know books! To read more about this ministry of ServeNow, click here: God’s Word for God’s People.