This morning, I had the joy and privilege of being with our most recent ServeNow bakery graduates in Ukraine! It was a special and beautiful time together as we worshiped, prayed, shared in God’s Word and heard some testimonies from the girls. 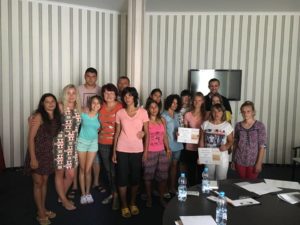 This truly is something God has done for them, because for six years they had been praying specifically for a bakery. By learning baking skills, this would be a way for them to sell to others as well as for their future husbands/family. It is that story that I would like to share with you, because this project is appropriately called “God’s Bakery.” 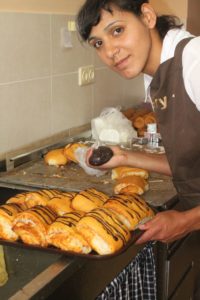 In Ukraine, one of the biggest societal problems is unwanted children/orphans. In addition, if you are a Gypsy, you are discriminated against and not wanted as a worker in many circles. Orphans also do not acquire any real life skills and sometimes not even a good education, putting them at a severe disadvantage once they are on their own at about sixteen years old. It becomes a vicious cycle of being trapped in poverty, crime, hopelessness, suicide, prostitution or human trafficking. That is why learning a skill can be a powerful means of preventing the horrors of human trafficking or other fates that are tragic. It gives them confidence, self-esteem and a means to work a meaningful job, which gives them hope for their future. 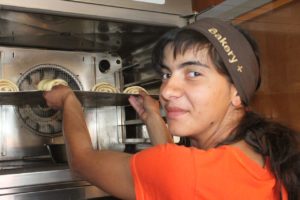 One woman and her husband in Ukraine had a real heart and burden to help make a difference in the lives of orphans. Mariya was working as a nurse and was so bothered by how many children were unwanted. She was also worried about what would happen to them. As they began serving with their church in a local orphanage they realized more needed to be done, especially for those who were becoming teenagers but left entirely on their own with no practical life skills.

They decided to take a step of faith after about four years of praying. They took in three of these teenagers as their own. It was not easy. First of all you are dealing with teenagers that have had a painful life. Secondly, they had very little resources to provide enough food and all that was needed. But they kept trusting God. At one point Mariya said they were completely out of food and she wondered if she was crazy for doing this. However, she decided to take tape and by faith write on it with marker, things such as “meat” “vegetables” etc and then stick it on her refrigerator as a sign that God would provide. And He did…and He continues!

Eventually, they were able to begin buying farm animals for the girls to take care of and as food for the growing family. But more was needed for these girls. The idea of a bakery began to come into Mariya’s mind. But she thought it was just a dream. However, the girls began to faithfully pray about this for six years! 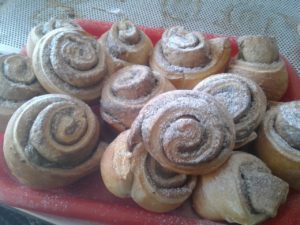 This is where ServeNow came into the picture. Without realizing it, and through a separate burden of our Ukrainian Leaders, we wanted to do something to help girls at risk learn a skill in order to protect them and provide a future for them. That’s when God connected the dots and through ServeNow, answered the prayers of this faithful couple and their orphan girls for a bakery. In October of 2015, the first group of students (orphans, refugee’s and Gypsy girls) began their training! Now, two years later, I celebrated the graduation of another group of young women.

But now we stand at a crossroads. The place we were renting space from can no longer accommodate. Rent elsewhere will be nearly eight times as much. The girls are praying (and we are standing with them) for their own building. There is a possible building available but it would take a big miracle to acquire the funds needed to purchase it. However, instead of only being able to train five to six at a time, we could train twenty. We could also open our own cafe, hire some of the graduates, and bake bread to send to those caught in the war zone or that are refugees. It’s a big dream, but we serve a big God!

I am passionate about this and also our other anti-trafficking programs in other parts of the world. For example, in Nepal (which I will be visiting again in the fall), we have incredibly successful tailoring courses. The last class had thirty women who went through the six month training and awareness course and all thirty graduated! Not only did they graduate, but each received their own sewing machine by which they are sewing clothes for their family, selling in their community and even freely making some for others in need. They have been able to turn their lives and situations around, begin saving money and being a blessing in return to others! Some of their stories can be read here. 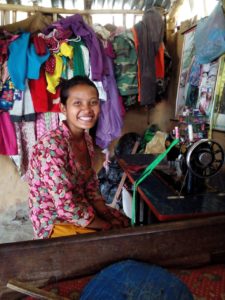 But two more groups of thirty or more are ready to go! One is through a new tailoring center we have opened in a slum in Nepal that has the highest rate of prostitution. This will be an alternative aimed at these young women who think this their only hope. The other, will be in a remote village where human trafficking is a problem and women are greatly at risk.

I am asking you to stand with us and share in this burden and need. We need your prayers, for it is God who provides. He is also looking for something more than just our “money.” He wants our hearts to be moved with compassion too. And if He moves your heart, I want to ask you to invest in these young women’s lives. I want to encourage you to be means through which God answers their prayers and gives them confidence and hope for their future. I want to invite you to share this burden with others and be a voice for the voiceless. I also invite you to come and see for yourself on one of our mission trips!

***If you would like to invest financially in the lives of these young women the following would be ways you could be a tremendous blessing. And if you do not have the resources to help in this way, would you pray that God might show you who you could share this with that might?

Provide a Sewing Machine to a Graduate: $199

1 thought on “God’s Bakery in Ukraine”