In the past couple of weeks, two medical clinics have been held in India. ServeNow has a goal of hosting at least one medical clinic a week in India and several this year in neighboring Nepal. The stories below, from the most recent clinics, paint a vivid and visual picture of the need and impact these clinics have in the lives of the people served in India.

This past week, the team of ServeNow conducted a medical camp in a remote village in Andhra Pradesh. Nearly 100 people, most of them senior citizens, attended the medical camp. The village does not have a basic health care center nor medical staff. The residents of the village have to walk at least 3.5 to 4 miles (there are no other means of transportation) to see a doctor. This is very difficult for the elderly, especially during the scorching heat in the summer. We had people come to our medical camp for treatment from even further away. This was the very first camp in this particular area. The local pastor, who requested us to conduct the camp, was so moved that our team came all the way from Hyderabad with a doctor and free medicines. He told us with tears in his eyes that he never thought big organizations would care for small churches and communities such as his, but ServeNow proved him wrong. He would like for us to do a second medical camp in another village, where he has started the only church. It is his desire to serve that community with medical assistance. 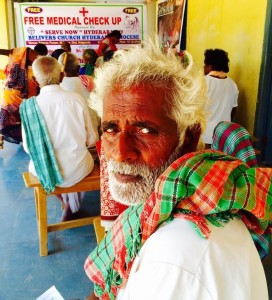 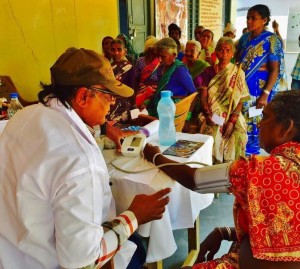 The week before, 120 people received free medical treatment in a village in Telangana. The pastor of the only church in this area had requested for a medical camp to be conducted there. Most of the people who received medical treatment were daily wage laborers and farmers. The people were suffering mostly from body aches, poor eyesight and breathing problems, mainly due to vitamin deficiency.

*Cheri, a 27-year-old woman with a 3-year-old child, was one of the villagers who attended the medical camp conducted by ServeNow last Saturday. She said; This free medical camp was a great benefit for me and my child. I received vitamins and medicine for my baby which I would not have been able to afford. I had some pains in my body for which I too received free medicine. There is no doctor in our village, and we need to walk for an hour in the scorching heat to reach one, which is impossible when we are sick. This camp was really a blessing. Thank you, ServeNow. 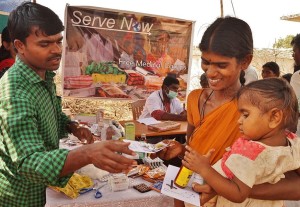 *Shapana is a Muslim woman. She had been suffering for the past few months from body pains, cold, cough and other problems. She had not been able to go to the doctor because she didn’t have the money. When the local pastor told her about the medical camp she was very happy. She was able to get the medical treatment she needed for free!

It doesn’t take much, but it does take some who are willing to give of their resources to make these type of clinic’s possible for those most in need. To read more click here: Medical Clinic’s. If you would like to sponsor a medical clinic click here: Sponsor a Medical Clinic.