This summer with temperature soaring to an all-time high, India is facing the worst crisis in a decade, with a severe water shortage likely to spread out throughout the country. Researchers have classified India as ‘water stressed’ which means the per capita availability of water is far less than prescribed level, perilously close to a “water scarcity condition”. Many states of India have been issued warnings for drought and acute water shortage in the coming Indian summer (May-August). Groundwater reserves have depleted by 50%, and the latest survey by the water resources department indicates that 66% of wells have seen a decline in water levels. 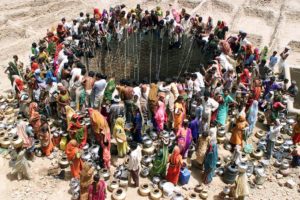 While it’s common to count hand pumps and tube wells as sources of drinking water, the quality of water from these sources is a carrier for many diseases. A recent report by the Central Pollution Control Board states that at least 650 towns and cities lie along the banks of polluted rivers, which severely affects the quality of groundwater in these places. 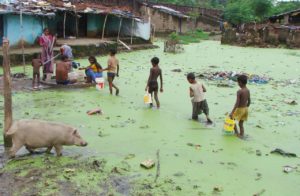 More than half of India’s groundwater is contaminated. 58% of Indian population depend on groundwater, the lack thereof leads to consumption of contaminated water. In the picture above a girl carries a pitcher after filling it with drinking water from a “virda”, a small opening made by villagers manually to collect water. Villagers walk two and a half kilometers to draw drinking water from them, and they say it takes 30-40 minutes to fill a five-liter jar. 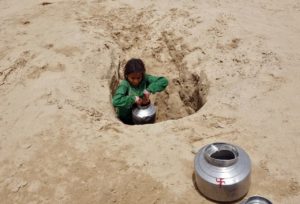 In the picture below a woman is collecting water from a pit from a riverbed due to drought in Maharashtra. Last year, over 29,000 villages in Maharashtra were declared to be drought stricken by the government.  This year the situation is going to get even worse. 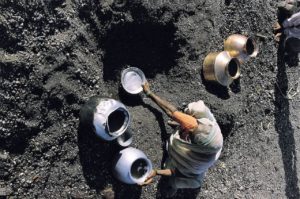 ServeNow’s Water for Life project is literally life saving for people who otherwise would not have access to clean drinking water during the hottest months. For example, a widow with three young children, Padma tries to provide just enough for her family of four – and there are times when the family has to do without a meal. Every day after work, Padma was forced to fetch water for the family from a nearby pond which has been gradually drying up over the past two of years and already contaminated.  Being a poor family they couldn’t afford to buy clean drinking water. ServeNow’s Water for Life was a lifesaver for Padma. “Now I don’t have to worry about my children’s health deteriorate due to contaminated water,” she says. 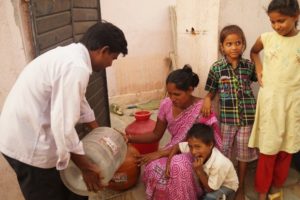 Through the water project, ServeNow is able to assist local churches and pastors so they can reach out to their communities. In one case it even helped a church to start! A pastor told us that in one community there was only one family of believers. Often this family would be ridiculed and even were socially outcast for their faith by the whole community. The water for life project opened a door however for the pastor and this family to share the Love of Christ with those who had wronged them over the years, providing much needed water for the community. With many days of fasting and prayer – the pastor started meeting with the non-believer families as the water program gave him a platform to connect with them more openly. As a result one more family has come to Lord and several others are regularly joining the prayer meetings! The pastor shared the following with us: “I am so excited that we didn’t just provided water for thirsty people, we could take them to the source of Living Water that satisfies and saves for eternity. Thank you Serve Now for helping in my mission to serve these villages!”


There are many requests from villages this year. Here is one request: “Please provide water to these families, living in huts and temporary shelters. Some of these villages have just one well which is already half dry. The water is already polluted and gives off a smell. Since people do not have a choice, they are forced to use that water for cooking and drinking, therefore they are often sick. Nobody has ever come to help us before. The water really meant a lot to us” 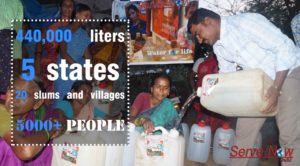 The amazing thing is…it costs so little to make such a big difference! Every $10 enables us to provide clean drinking water to one family for one month! $100 reaches ten family’s. $1,000 is a whole community of 100 people!! Everybody can do something, no matter what level of giving is possible for you. To make a donation click here: Clean Water. 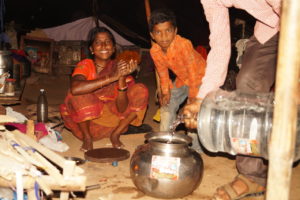 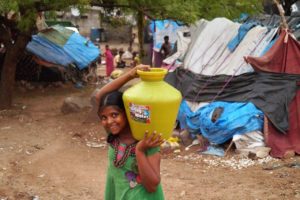