ServeNow will be working in a new slum this year, situated in the outskirts of Hyderabad. According to the last census done in 2011, there were 5,978 children below six years of age in this specific slum. Telugu is the local language here. This particular slum was where all the beggars and people from the streets had been placed in a 10 x 10 shack as part of a government effort to keep the city clean. With a very low literacy rate, the only way for most of the people here to earn a living is manual labor. Since the slum is surrounded by rocky terrain, most of the slum dwellers work as stone cutters for construction companies who usually exploit them by not paying them proper wages. For these daily wages earners, a day of illness means a day without wages and sometimes a day without food for the whole family. Most men are alcoholics and addicts, and providing for the family becomes a difficult task, if not impossible. Living in conditions like these, the innocent children suffer the most. Most of them do not even get an opportunity to go to school and those who do attend school, attend the local educational centers which are sometimes short of experienced teachers and facilities. This particular slum is the proposed location for a ServeNow Lighthouse. 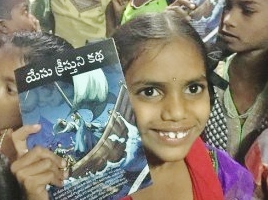 What we will do

ServeNow has been requested by the local church leader in this slum to start a tuition center to help children of the laborers who cannot afford to go to school. These children will be taught elementary school subjects by volunteers, and they will also be introduced to the love of Christ. Through this program, we wish to reach around 30 of these children and help them grow in both their studies and spiritually.

Pastor *Jason is from South India. He was born as Swami into a Brahmin family; these people are known to be very strict and strong in their belief in Hindu Gods and strongly oppose Christianity or any other religion. *Jason was imprisoned when his then-wife and her family falsely accused him of torturing her for dowry.

While in prison, *Jason had a vision in which the Lord assured him that he would rescue him if only he believed. When he shared the vision with the constable on duty, the police got scared that if someone really broke in the jail to rescue Jason, their jobs would be in danger! The very next day, *Jason was released on condition that he would never be seen in the state.

*Jason fled to Hyderabad and learned more about the Lord. He read the Bible and grew stronger in his faith. *Jason now wanted to tell other people about Jesus. He chose this slum to start a small fellowship. He now oversees 8 fellowships, and has had the privilege of bringing hundreds of people into a close and committed walk with Jesus!

Pastor *Jason knows what it is like to be an illiterate person and the various problems one faces when uneducated. He doesn’t want the children in the slum to undergo what he had to go through, just because they never had an opportunity. He, along with his team, want to start a tuition center aimed not only at providing good education for the children in the slums, but also introducing them to the love of Christ.

*Rupsen is a 19 year old orphan brought up by Pastor *Jason. At a very young age, in a fire mishap, he lost both his hands. All he has left are two fingers on his right hand, yet none of this could stop this young man to grow up in the knowledge and fear of the Lord. He is now pursuing graduation and doing very well. *Rupsen is in charge of this free tuition program. He has gathered more than 60 non-Christian children specifically for this program.

Children: Here is one of these kids that will attend the program.

Aharon is a 9-year-old boy, and he is the oldest of two children. His father is a house builder, and he is the only breadwinner in the family. Aharon’s mother is bedridden due to a serious sickness. His younger brother, Israel, suffers from a heart problem; the doctors said that he has a hole in his heart. Aahron attends church and Sunday School frequently. He loves the food that the church provides. His favorite color is yellow, and his favorite food is Biryani (a dish of rice mixed with vegetables and meat). He also enjoys reading cartoons.His mother tongue is Tamil, but he speaks Telugu (local language) too.

Aharon and the other kids are so excited to attend the free tuition classes. Let’s give them hope for a better future and serve them through the lighthouse! 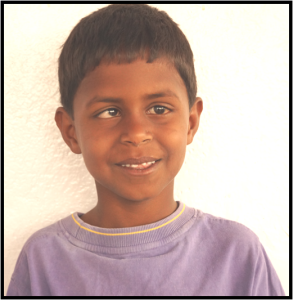 If you would like to partner with us in serving children who are most in need, you can make a donation here: Children’s Lighthouse Centers. Or, you can specifically sponsor one of these children for $37 a month. Contact us at iyoung@weservenow.org for more information and to select a child. Or, click here to give through the website manually: Sponsor a Child.