Here are some more stories about the children that attended our second summer camp, in the Carpathian Mountains. Even though they all came from different locations and backgrounds, they all had one common thread: they’re all disadvantaged children in need of hope, joy and peace in their lives!

Anya and Vlad. These children come from a large, poor family. Because of their financial problems, the relationships within the family are disconcerting. The children really need a positive example of kindness, friendship and care, and at the camp they were able to experience such examples. They made a lot of new friends. They also had the opportunity to prove themselves in their team while competing against other teams. 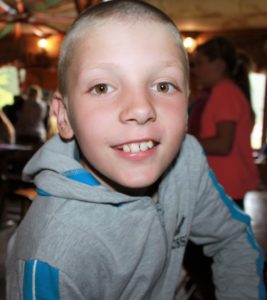 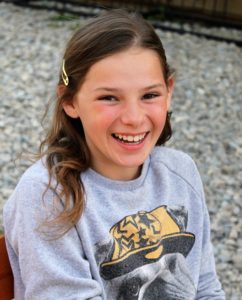 Vanya is 10 years old. He lives in a village close to Kiev. Once he attended Sunday school, although his parents don’t go to church. His mother works in Kiev; she sent Vanya to live with his grandparents, but they drink often.  It’s a big gift for a child to get to go to a summer camp. It was here that he began to pray with everyone. Vanya will continue to attend Sunday school when he gets back to his grandparents’ house. While at the camp, he made friends with his mentor and began to trust him. He really needs support from adults, and it was important that he received that at camp. 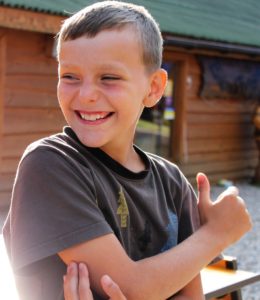 Marina is 9 years. She doesn’t have a father, and her stepfather died recently. Therefore, her mother has to raise Marina by herself. The mom is in a very difficult financial situation, and she would not have been able to send Marina to a camp. Marina made friends with all the children, and she began to trust adults more. For her, it was very important to be among believers and to learn from positive examples. After the camp, Marina will go to Sunday school and learn more about Jesus Christ. 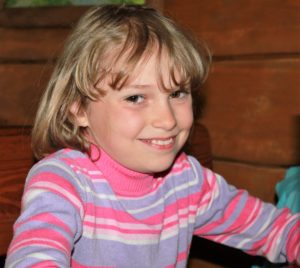 Nazar and Darina. These children are from a village near in northern Ukraine. Their family is very poor. Nazar attends a boarding school during the week, because it is difficult for the family to feed their children; at a boarding school he can eat, sleep and attend school. At the camp, the children heard about the Lord and learned how to pray. Nazar even led the prayer before meals and before bedtime with other children in his room. It is also very important that children can see positive examples of how adults communicate with each other. 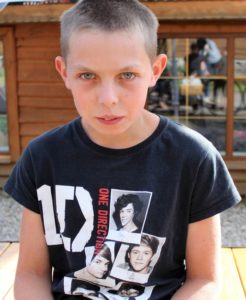 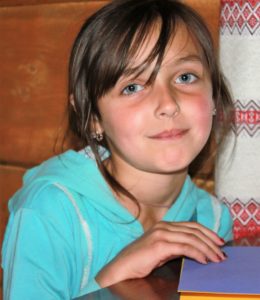 Olya and Anya are 12 and 9 years old. They are from an underprivileged, large family. There are four children, and their mother is expecting a fifth child. Their dad works, but is also an alcoholic and can be abusive.This is typical for a family in a Ukrainian village: and the children never have a chance to leave their village as a result of poverty. The children love their mother, and they worried about her while at camp. During one of our discussions, the children were encouraged to pray for their families, and little Anya even cried. The children learned to communicate with others while at camp. They met different people, even people from other countries. This is a great opportunity in their lives, and, most likely, a once in a lifetime event. 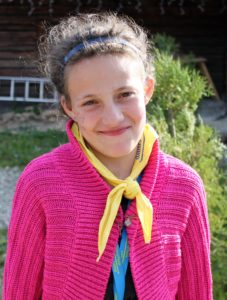 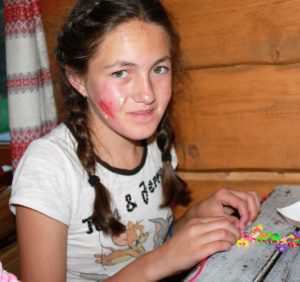 Misha and Varya are 10 and 12 years. There are three children in their family. Their dad was part of a covert operation during the war in eastern Ukraine. He doesn’t like to talk about it. Both the children got a chance to test themselves in “extreme” conditions, such as hiking through the mountains during heavy rainfall and various endurance challenges. They learned to make friends, work together as a team, and give and receive support. The kids loved the Bible lessons, and Misha and Varya liked to talk about what they learned. 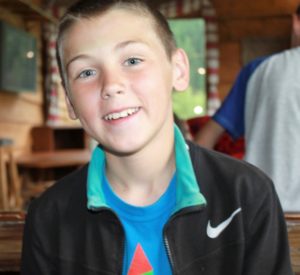 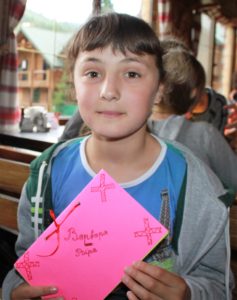 Dmitry is 12 years old. Dima’s family has been displaced from a war zone in eastern part of Ukraine. They have seven children. Before the war, they lived in a town where they had a big house. Sadly, they had to leave their home because of the war. Now they live in a rented apartment, and their need is great. Unfortunately, they cannot go back home; their home town is still in a hostile environment. Dima enjoyed his time at the camp very much. After the Bible lessons, Dima offered to the children with whom he shares the same room, to read the Bible before going to bed. And all the children joined to read the Bible with him. At the camp, Dima learned to take part in team sports, and he made lots of new friends. 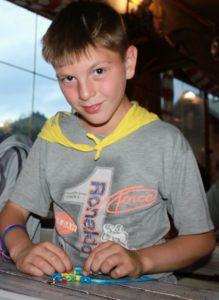 Alice is 10 years old. While at the camp, Alice learned to pray for her family. This meant a lot to her, because her parents are on the verge of divorce. The family lives in a small village. Alice is part of a Christian club and she has to walk for half an hour to get to their meetings. It was so important for her to make new friends and to play with other children. At the beginning of the camp, she cried and worried about her mother. But after that, she began to enjoy the camp more, and she felt safe and cared for. 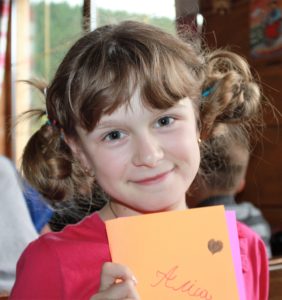 Vasya is 9 years. Vasya took part in all the activities and just had fun. He made a lot of new friends. He comes from a poor family of three children. The oldest child is very sick, and the younger kids worry about him so much. While at camp, Vasya learned to pray for his family and for his brother. 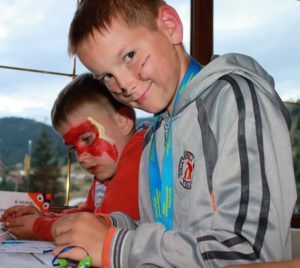 Nadia is 12 years. She lives with her younger sister and grandmother. Their parents are alcoholics and therefore, they do not take care of the children. The mother lives with a man who is not the father of the children. Their grandmother is very strict. Thankfully, Nadia was able to experience true love and care while she was at the camp. She is a very disciplined girl, and her teacher told us that she’s doing really well at school. Nadia learned from the Bible lessons that deceiving others is a sin, so she is trying not to do this. 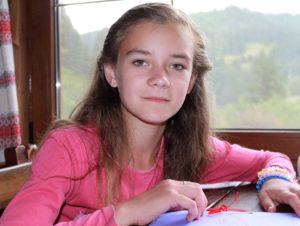 Sofia, Cristina and Bogdan are 11, 7 and 9 years old. The children come from a family of five children, all of them live at the local boarding school, in the same room. At the camp, the children learned to be friends, because before the camp they often quarreled. The youngest, Bogdan, learned how to cope better by himself. During meal time, the children learned table manners, such as eating with cutlery; they never learned any of this at their home.

Radik is 12 years old. He is very active and mischievous boy. His parents sent him to a boarding school, because they cannot cope with the upbringing of their son. Radik has a predisposition to tuberculosis, and without ServeNow, he never would have been able to attend this camp. He had hardly ever left his village. Radik was very talkative at the camp; he liked to ask questions during our evening gatherings. He also learned to play the guitar a little. 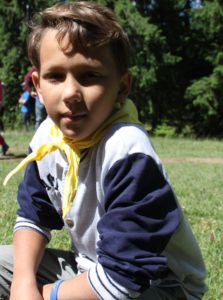 Denis is 12 years old. He comes from a large family. Denis has been at a boarding school since first grade; he stays there 5 days a week, and then he goes home on the weekends. He has a complicated relationship with his stepfather. This was the first time for Denis to attend a camp, and to be in the mountains. He greatly admired the living conditions and food at the camp. He enjoyed singing worship and action songs with the other children before our Bible lessons. 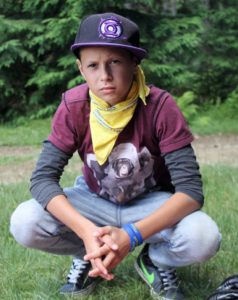 Maxim and Anatoly are 12 and 10 years old. The boys come from a family of 8 children. Four of them live at a boarding school. Their mother sent them there, because it was difficult for her to feed them and take care of them. The family’s financial situation is very difficult. As a result of malnutrition, the children’s health has declined. During the first days of the camp, Maxim and Anatoly couldn’t eat enough, and they loved all the food. They also enjoyed all the games and competitions. They were able to make a lot of new friends as well. 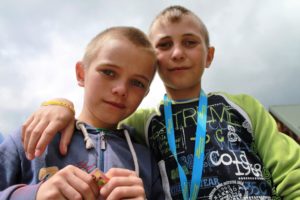 Tanya is 12 years old. She comes from a large family, and they live in a village. Tanya and her younger sister live at a boarding school during the week. Their mother has no money to feed the children, so the boarding school was her only option. Tanya had never left her village and never traveled by train. This was a great, once in a life time adventure. Tanya remembered the adventurous excursion up the mountain and how children were caught in the rain. She learned not to be afraid and to work together with others, as a team. 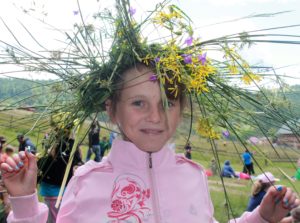 Lera is 11. She comes from a family of 8 children. Their mother cannot cope with the upbringing of her children, and she abuses alcohol. She wasn’t able to properly prepare Lera for the summer camp, couldn’t buy all the things Lera would need, and, for example, she arrived at the camp without sports shoes. During camp, Lera called her mother, because she wanted to talk to her, but her mother did not answer. The girl worries about her mother so much. Lera really enjoyed playing board games and doing crafts. She also loved singing praise songs before our Bible lessons. 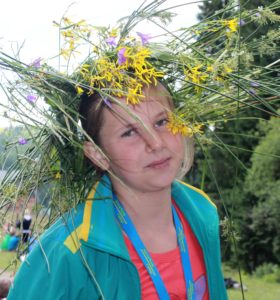 Anya is 11 years old. Her health is frail, and she has a predisposition for tuberculosis. She comes from a very poor family, and they have never been anywhere other than their village. To get to our camp, Anya had to take the train for the first time in her life; this was a huge event for her, and most likely this will never happen again. Anya learned to sing songs, and she loved doing crafts. She blossomed during the 10 days at camp, surrounded by nature’s beauty and loving, caring people. 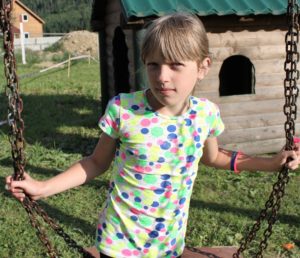 There is one more camp for kids in similar situations taking place in the same location in Ukraine. As you can tell, these camps are so needed and important for these kids. Would you help us with financial needs still unmet for these camps by sponsoring a child or giving a generous gift today? If so, you can give here: Summer Camp Donation.