Right now, you cannot miss a news headline or story about the possibility of Russia invading Ukraine. 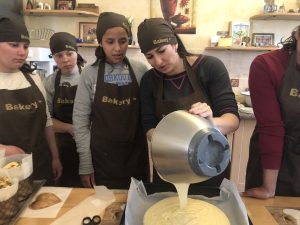 Our nonprofit has long ties and a history of working in Ukraine. Our people are on the ground in Ukraine serving our mission, “sharing Christ’s passion for the world by serving the most vulnerable through national churches and leaders.”

It breaks our hearts to see staff, volunteers, families, and friends live with the looming threat of Russia invading Ukraine. Our entire staff is praying and proactively preparing for what’s to come if Russia invades Ukraine. To us, if Russia invades then it would impact the further impoverishment and need for hope in Ukraine.

Why is there conflict?

Ukraine was part of the Soviet Union for centuries before it collapsed at the end of the Cold War in August 1991.

As the USSR broke up, Ukraine won independence from the Russian empire and declared itself a neutral state. This small Eastern European country borders Russia to its east; Poland, Slovakia, and Hungary to the West; Romania and Moldova to the South; and a coastline along the Sea of Azov and the Black Sea.

In 2013, President Viktor Yanukovych suspended the Ukraine-European Union Association Agreement to seek closer economic ties to Russia. Which began several month-long EuroMaidan demonstrations and protests to overthrow Yanukovych. The previous president was removed from office and Ukraine establish a new government. Thus, Russia responded with the annexation of Crimea (previously Ukraine’s peninsula) in March 2014 and the War in Donbas broke out in 2014, the current war in Ukraine’s east.

In a televised speech, President Volodymyr Zelenskyy urged Ukrainians not to panic. Ukraine authorities reassured the nation and its citizens that an invasion from neighboring Russia was not imminent. Meanwhile, Ukraine received the shipment of $200 million U.S. military equipment for defense and assistance.

So why did this all happen and what’s to come if Russia invades Ukraine?

A Signal from The United States and NATO

The United States Pentagon ordered 8,500 troops on “heightened alert” to assist defense for NATO allies. This signals a shift in what’s to come—the possible Russian invasion of Ukraine. At the press conference, Pentagon spokesman, John F. Kirby said, “It’s very clear the Russians have no intention right now of de-escalating.” 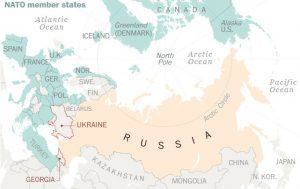 Ukraine is not a member of NATO, and The United States is not bound by the treaty to defend Ukraine. So why is the U.S. preparing 8,500 troops? “This is really about reassuring the eastern flank of NATO,” Kirby said. This action provides assurance to American allies in Eastern Europe who are fearful of Russian invasion – that could extend into the Baltics and other counties in NATOS’s vicinity. The Biden Administration is considering the deployment of several thousand U.S. troops, warships, and aircraft to NATO allies in the Baltics and Eastern Europe.

Over the weekend, the U.S. ordered family members of personnel at U.S. Embassy in Kyiv to leave Ukraine and authorized the voluntary departure of nonessential staff over security concerns. On Monday, the U.K. tweeted it was withdrawing some staff from its embassy while Australia told its citizens to leave Ukraine. Even families of Canadian diplomatic staff were told to leave.

Current news and events are indicating to the entire world the risk of a Russian invasion of Ukraine. The decision of the U.S., Britain, Australia, Germany, and Canada to withdraw some of their diplomats and dependents shows their readiness to work together as a team. The United States and its NATO allies prepare for a possible war, imminent or not.

How Can I Help and Partner with ServeNow?

We believe in the power of prayer! You can join us in prayer for the divine protection and the comfort of our staff, volunteers, families, and friends in Ukraine.

Philippians 4:6-7 says, “Do not be anxious about anything, but in every situation, by prayer and petition, with thanksgiving, present your requests to God. And the peace of God, which transcends all understanding, will guard your hearts and your minds in Christ Jesus.”

We believe to Serve Now and Procrastinate Later. Our National Director, Tanya, communicated in advance an action plan if Russia invades. ServeNow will work to react quickly and release emergency funds to serve the vulnerable people of Ukraine, but we will need your help and generosity.

If Russia invades Ukraine, please consider responding with generosity to help us serve promptly. You can give online for Where Needed Greatest as an emergency fund or even write a check to ServeNow, 1817 Austin Bluffs Parkway, Colorado Springs, CO 80918.

Have questions? Email our staff at servenow@weservenow.org. We’d love to share more about ServeNow’s programs in Ukraine or answer any questions about our Christian non-profit.