Nearly every week, a medical clinic is held in a remote village or slum in India. In many of these places, people have never even seen a doctor before, or cannot afford to visit a doctor. Check out these recent stories just within the past month from several medical clinic’s.

*Samuel, the pastor of the small community of believers and a partner of ServeNow, shares: Since the spring harvest was far below expectation, the farmers have been struggling to feed their families and trying to survive. The drought in the state has made it next to impossible to earn money as a farmer, which is especially stressful because of the bank loans they took out during the sowing season, anticipating a good crop. It’s not only hard for them to feed their families, but also to take care of those who are sick. ServeNow’s medical camp is a great help to many of the villagers, some of whom have been sick for days, weeks and sometimes even months. He further adds: It is wonderful to see how ServeNow takes care of not only spiritual needs, but also the physical needs of the people. I, on behalf of my church and community, am very thankful to ServeNow. 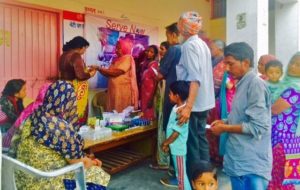 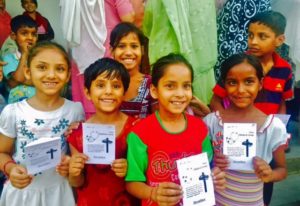 Medical camp in a village of Himachal Pradesh

After a 3-hour drive from our district headquarter in Himachal Pradesh, a narrow trail took us to the small village where a local pastor and a group of 80 senior citizens and children were eagerly waiting for us alongside the road. This village, situated on rough terrain, without proper communication, is inhabited by about 100 families. Most them have only small plots to land to farm on, sometimes no more than the size of a kitchen garden. They earn their living by selling what little crops they manage to grow at the local market, for which they have to walk miles. Except for one government-run bus that visits the village once a day or once every other day, there is no transportation. It makes it difficult for people when they need to visit a doctor, because the nearest doctor lives 26 kilometers away, and hiking that distance is impossible for the elderly, children and pregnant women.

Here we met Raj, an octogenarian, who, along with his elderly wife, had not been able to visit a doctor for quite some time. When he heard about ServeNow’s free medical camp in his village, Raj walked for almost an hour and a half for a consultation with the doctor and free medicine. After walking out of the camp with medicine and a special vitamin tonic for him and his wife, Raj said; This is the first time there has been a medical camp in my village. These medicines are such a blessing as I cannot go to the doctor due to my frail body. Thank you, ServeNow, for your thoughtfulness. My wife and I are blessed. 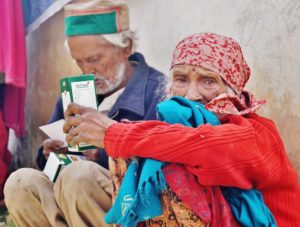 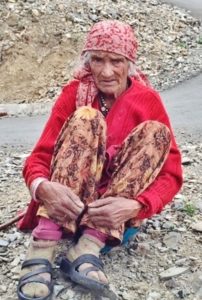 ServeNow conducted a medical camp in one of the most deprived tea gardens in the Dooars region of West Bengal, close to the Indo-Bhutan border. During the three-day medical camp, ServeNow ministered to around 400 patients with the help of two doctors and several volunteers. There were people who attended the medical camp who had come from miles away; mostly from surrounding tea gardens which have either been closed down or are on the verge of closing down. The people, mostly tribal, work as daily wage laborers by plucking tea leaves. This gives them some income, but it is usually not enough to meet all their needs. The risk of the tea gardens shutting down makes the situation worse. 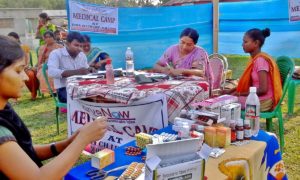 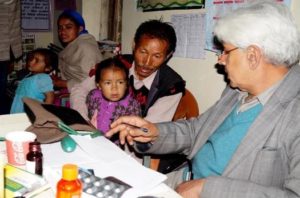 A friend of mine, who is a missionary and who has settled down among a tribal people, approached us a month ago with the question if we could conduct a medical camp for those in need. He asked for the camp to be held during an evangelistic crusade he was organizing for the people in the area. The local newspaper reported that 450 people were treated during the 3-day medical camp. I learned from my friend that the crusade went really well too; thousands gathered to hear the word of God. Some have dedicated their lives to the Lord and were touched by the Holy Spirit. People were not only ministered to physically, but also spiritually.

In his own words, my evangelist friend said: I am very thankful to ServeNow for conducting a medical camp for three days. Had it not been for the camp, many people would not have come to hear about the Lord. Most of the patients came from closed down tea gardens nearby who are suffering from lack of nutrition and vitamins. They are so weak that they cannot manage to travel to hospitals and cannot afford treatment. It’s a famine-like situation everywhere. The people were so happy to have a qualified doctor treat them, and it was wonderful to see the medicines bring smiles on the people’s faces. Thank you, ServeNow, for helping me reach hundreds of people who really need love and care. 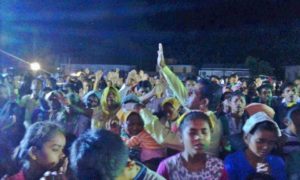