As I write this post, the mercury is rising to levels that India has never witnessed before. With temperatures reaching as high as 45 degree Celsius (113 F), the city I live in (Hyderabad) has already recorded the highest temperature in 40 years, and the heat wave has already claimed more than 112 lives! Kolkata, where we run a school for slum children, had to declare their school summer break earlier than usual as nearly one third of the students are down with dehydration and heat stroke. Just this morning I learned that during these past few weeks more than 30 people lost lives in a heat wave in Orissa. The Meteorological Department has already issued serious warnings of an oncoming heat wave throughout the Indian subcontinent.

In several Indian states, such as Orissa, Andhra Pradesh, Telangana, Maharashtra, Rajasthan and Gujarat, where drought-like situations and killer heatwaves are prevailing, the situation is getting out of control. The government administration in Maharashtra’s Latur District has banned groups of people from gathering near the water sources following violent skirmishes between increasingly desperate residents. No more than five people at a time are allowed at wells and public storage tanks over growing fears of water riots. In some villages, women have to walk up to three kilometers (1.9 miles) from home to fetch water that is muddy. In places where water is only available once or twice a week, there have been reports of people drinking water that was meant for cattle. One of the officials said: People have no choice but to use that water. They are falling ill with cases of cough and fever, especially among women and children. While the government is doing all it can, such as transporting tanks full of water by train to certain areas, the estimated need is hundred times more.

Last year, through the Water for Life project, ServeNow provided relief to 15 rural and slum communities in Andhra Pradesh and Orissa; literally thousands of lives were saved. 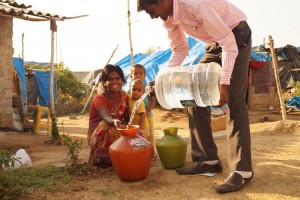 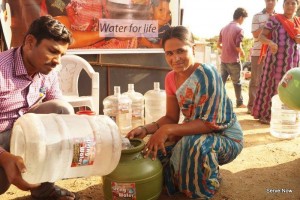 For this summer, we already have received at least 25 requests from our network of pastors and community leaders, each of them asking for help with clean drinking water for 5,000 people in 3 states. These one gallon bottles of clean water will save the lives of many who are vulnerable to waterborne diseases, as they are forced to consume unclean water under unhygienic living conditions.

It just takes a willing hand and heart to share the love of Christ in a meaningful way to the people who are thirsty for water and care. Join with us: together we can save lives, one drop at a time. Remember, it was Jesus who said; And if you give even a cup of cold water to one of the least of my followers, you will surely be rewarded (Matthew 10:42, NLT). A small act like this can often make a big difference. For example, a woman named Teresa, who lives by herself in a small room, told us that she often feels disconnected, even isolated from the rest of her community. She cried tears of gratitude when ServeNow came to her home to give her a container of clean water. She said; No one has ever come to my home to help. I have never felt such love and care before.

***We must respond quickly and immediately to help those most in need! To give now to this effort click here: Water for Life. Every $10 provides clean water for one family for one month! Every gift matters. Every gift makes a difference!

1 thought on “Water Crisis in India”